As global COVID-19 deaths top 4 million, a suicide in Peru 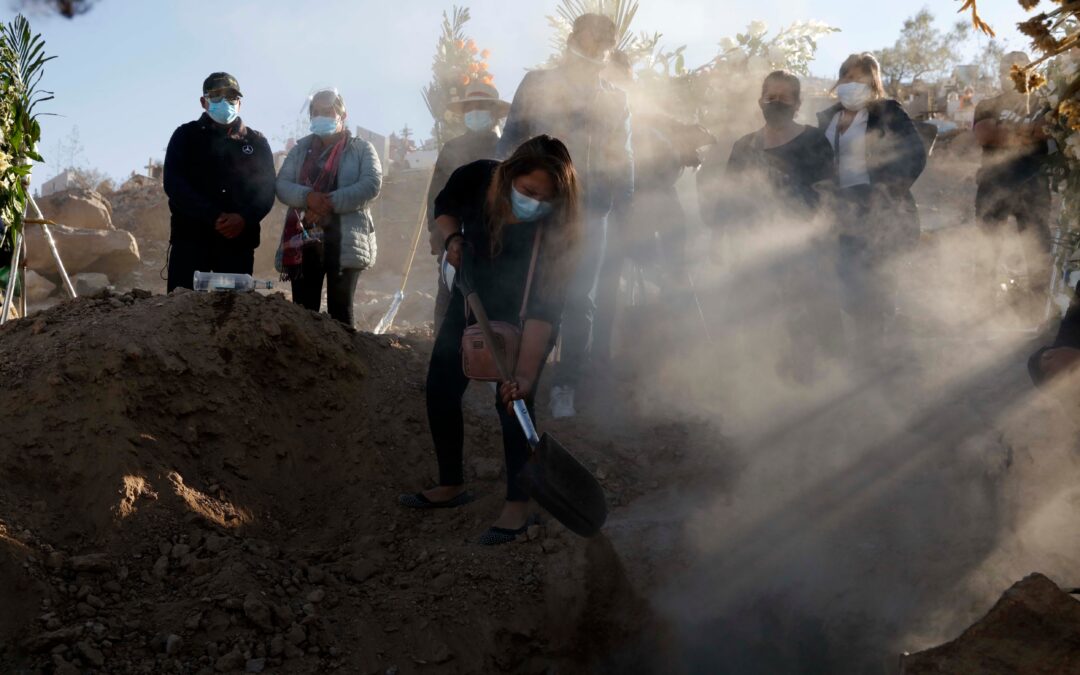 On the last day of Javier Vilca’s life, his wife stood outside a hospital window with a teddy bear, red balloons and a box of chocolates to celebrate his birthday, and held up a giant, hand-scrawled sign that read: “Don’t give up. You’re the best man in the world.”

Minutes later, Vilca, a 43-year-old struggling radio journalist who had battled depression, jumped four stories to his death — the fifth suicide by a COVID-19 patient at Peru’s overwhelmed Honorio Delgado hospital since the pandemic began.

Vilca became yet another symbol of the despair caused by the coronavirus and the stark and seemingly growing inequities exposed by COVID-19 on its way to a worldwide death toll of 4 million, a milestone recorded Wednesday by Johns Hopkins University.

At the hospital where Vilca died on June 24, a single doctor and three nurses were frantically rushing to treat 80 patients in an overcrowded, makeshift ward while Vilca gasped for breath because of an acute shortage of bottled oxygen.

“He promised me he would make it,” said Nohemí Huanacchire, weeping over her husband’s casket in their half-built home with no electricity on the outskirts of Arequipa, Peru’s second-largest city. “But I never saw him again.”

The number of lives lost around the world over the past year and a half is about equal to the population of Los Angeles or the nation of Georgia. It is three times the number of victims killed in traffic accidents around the globe per year. By some estimates, it is roughly the number of people killed in battle in all of the world’s wars since 1982.

Even then, the toll is widely believed to be an undercount because of overlooked cases or deliberate concealment.

More than six months after vaccines became available, reported COVID-19 deaths worldwide have dropped to around 7,900 a day, after topping out at over 18,000 a day in January. The World Health Organization recorded just under 54,000 deaths last week, the lowest weekly total since last October.

While vaccination campaigns in the U.S. and parts of Europe are ushering in a period of post-lockdown euphoria, and children there are being inoculated so that they can go back to summer camp and school, infection rates are still stubbornly high in many parts of South America and Southeast Asia. And multitudes in Africa remain unprotected because of severe vaccine shortages.

Also, the highly contagious delta variant is spreading rapidly, setting off alarms, driving up case counts in places and turning the crisis increasingly into a race between the vaccine and the mutant version.

The variant has been detected in at least 96 countries. Australia, Israel, Malaysia, Hong Kong and other places have reimposed restrictions to try to suppress it.

The variants, uneven access to vaccines and the relaxation of precautions in some wealthier countries are “a toxic combination that is very dangerous,” warned Ann Lindstrand, a top immunization official at WHO.

Instead of treating the crisis as a “me-and-myself-and-my-country” problem, she said, “we need to get serious that this is a worldwide problem that needs worldwide solutions.”

While the U.S. missed President Joe Biden’s goal of getting at least one shot into 70% of American adults by the Fourth of July, deaths nationwide are down sharply to around 200 per day, from a peak of over 3,400 per day in January.

And the U.S. economy has been roaring back, with growth this year forecast to be the fastest in almost seven decades. Even cruise ships, an early vector for the virus’s spread, are resuming voyages after a hiatus of more than a year.

In Britain, despite persistent fears about the delta variant, Prime Minister Boris Johnson plans to lift all remaining restrictions this month. Britain this week recorded a one-day total of more than 30,000 new infections for the first time since January.

Elsewhere in Europe, tens of thousands of soccer fans in several cities were able to watch in person their national teams compete in the European Championship a year after the tournament was postponed, though attendance in some stadiums was severely restricted.

In parts of the developing world, it is a story of desperation.

Peru has been one of the hardest hit by the virus, with the highest mortality of any country in the world as a percentage of its population.

In Arequipa, Vilca’s suicide was splashed across the front pages of the tabloids in the city of 1 million. His widow said his death was a protest against the deteriorating conditions faced by COVID-19 patients.

Nationwide, Peru has just 2,678 intensive care beds for a population of 32 million — a trifling number even by the low standards of Latin America. Nor was Vilca among the lucky 14% of Peruvians who have received a single dose of the vaccine.

Across the country, a new routine has emerged as people spend their days scrambling to fill heavy, green oxygen tanks bought on the black market that are a lifeline for sick loved ones. Some businesses have tripled the price for oxygen, forcing many people to plunder their savings or sell belongings.

From the hospital where Vilca took his life, “he’d call and say they were all abandoned. Nobody was paying attention,” his widow said, showing on her cellphone a photo her husband sent of himself in one of the rare moments he was lucky enough to have an oxygen mask.

Along with South America, which accounts for around 40% of the daily deaths from COVID-19, India has emerged as the other main driver of mortality. Even then, experts believe the roughly 1,000 deaths recorded daily in India are almost certainly an undercount.

In the state of Madhya Pradesh, with over 73 million people, one journalist found that that the spike in registered deaths from all causes in May alone was five times pre-pandemic levels and 67 times the official death toll from the virus for the month, which was 2,451.

Rich countries including Britain, the U.S. and France have promised to donate about 1 billion COVID-19 shots to help close the inequality gap. But experts say 11 billion are needed to immunize the world. Of the 3 billion doses that have been administered globally, less than 2% have been in the developing world.

“Pledging to provide 1 billion doses is a drop in the ocean,” said Agnes Callemard, Amnesty International’s secretary-general. She slammed politicians for opting for “more of the same paltry half-measures and insufficient gestures.”

The U.N.-backed effort to distribute vaccines to poor countries, known as COVAX, has also faltered badly. Its biggest supplier, the Serum Institute of India, stopped exporting vaccines in March to deal with the epidemic on the subcontinent.

Meanwhile, countries including Seychelles, Chile and Bahrain, relying on Chinese-made vaccines, have seen outbreaks even after reaching relatively high levels of coverage, raising questions about the shots’ effectiveness.

Dora Curry, an Atlanta-based director of health equity at the charity CARE, said she is deeply worried that while children in Germany, France and the U.S. are getting immunized, relief is slow to arrive for people far more vulnerable in poor countries.

“If there were a way I could give that dose to somebody in Uganda, I would,” said Curry, who acknowledged she will probably have her 11-year-old daughter immunized when she is eligible. “But this just speaks to the problems with the distribution system we have.”