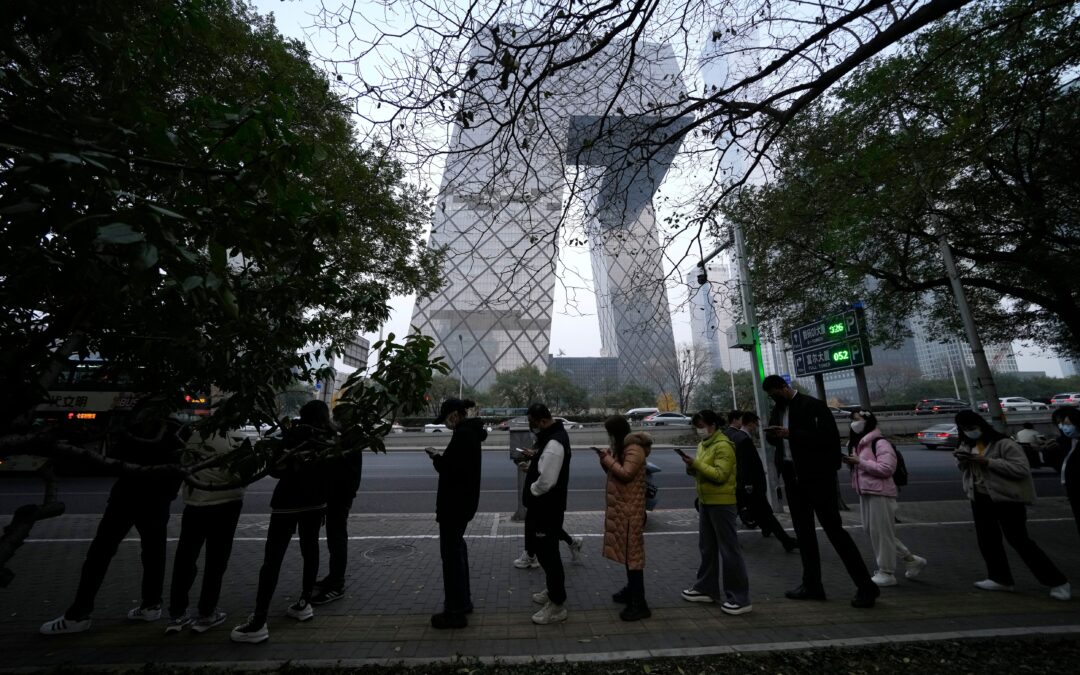 Chinese leaders promised Thursday to improve quarantine and other anti-virus policies after public frustration boiled over into protests but said they will stick to a severe “zero COVID” strategy that has confined millions of people to their homes and disrupted the economy.

President Xi Jinping’s government is enforcing some of the world’s most extreme anti-virus restrictions despite rising costs while other countries ease travel and other curbs. The government has given no indication when it might ease controls that have shut down Shanghai and other major cities for weeks at a time to find and isolate every infected person.

The ruling Communist Party’s seven-member Standing Committee said it will “unswervingly adhere” to “zero COVID” but promised to make it less disruptive. It said 20 changes including in quarantine, testing and treatment were approved but gave no details. The party promised to release “stranded people” who have been in quarantine or blocked for weeks from leaving cities where there are cases.

“We will protect people’s lives and health to the greatest extent and minimize the impact of the epidemic on economic and social development,” the party leaders said in a statement.

“Zero COVID” has kept China’s infection rate relatively low but weighs on the economy and has disrupted life by shutting schools, factories and shops or sealing neighborhoods without warning. The closure of Shanghai and other industrial centers starting in March sent shockwaves through global trade.

Following a new upsurge in cases, a growing number of areas are shutting down businesses and imposing curbs on movement. Videos circulated on social media show people in some areas protesting or fighting with police and health workers.

On Thursday, the National Health Commission reported 1,133 new cases had been found in the previous 24 hours, including 500 in the southern business center of Guangzhou, the latest hot spot. In addition, it said testing found 7,691 people to be infected without showing symptoms.

Forecasters say Chinese economic growth is weakening again after rebounding to 3.9% over a year earlier in the three months ending in September, up from 2.2% in the first half. Economists expect annual growth to be as low as 3%, less than half of last year’s 8.1%.

The Standing Committee was named last month by a party congress that also expanded Xi’s political dominance by appointing him to a third five-year term as leader. It is filled with his allies.

“Zero COVID” requires people to show a negative result from a virus test taken as often as once a day to enter office buildings, shopping malls and other public places. People from cities with a single case in the past week are barred from visiting Beijing, the capital.

Travelers from abroad are required to be quarantined in a hotel for seven to 10 days. Business groups say that discourages foreign executives from visiting, which has prompted companies to shift investment plans to other countries.

Last week, access to part of the central city of Zhengzhou, home to the world’s biggest iPhone factory, was suspended following outbreaks. Thousands of employees walked away from the factory run by Taiwan’s Foxconn Technology Group last month following complaints that coworkers who fell ill received no help and working conditions were unsafe.

Also last week, people posted outraged comments on social media after a 3-year-old boy whose compound in the northwest was under quarantine died of carbon monoxide poisoning. His father complained that guards who were enforcing the closure refused to help and tried to stop him as he rushed his son to a hospital.

Health experts and economists say “zero COVID” is likely to stay in place for up to one more year. They say millions of elderly people must be vaccinated before Beijing can relax quarantine restrictions on people coming to China.

Share prices of Chinese companies surged on the Hong Kong stock exchange last week after rumors circulated on social media that Beijing was considering easing controls. They fell back after the government did not confirm the rumors.