Olympics, pandemic and politics: There’s no separating them 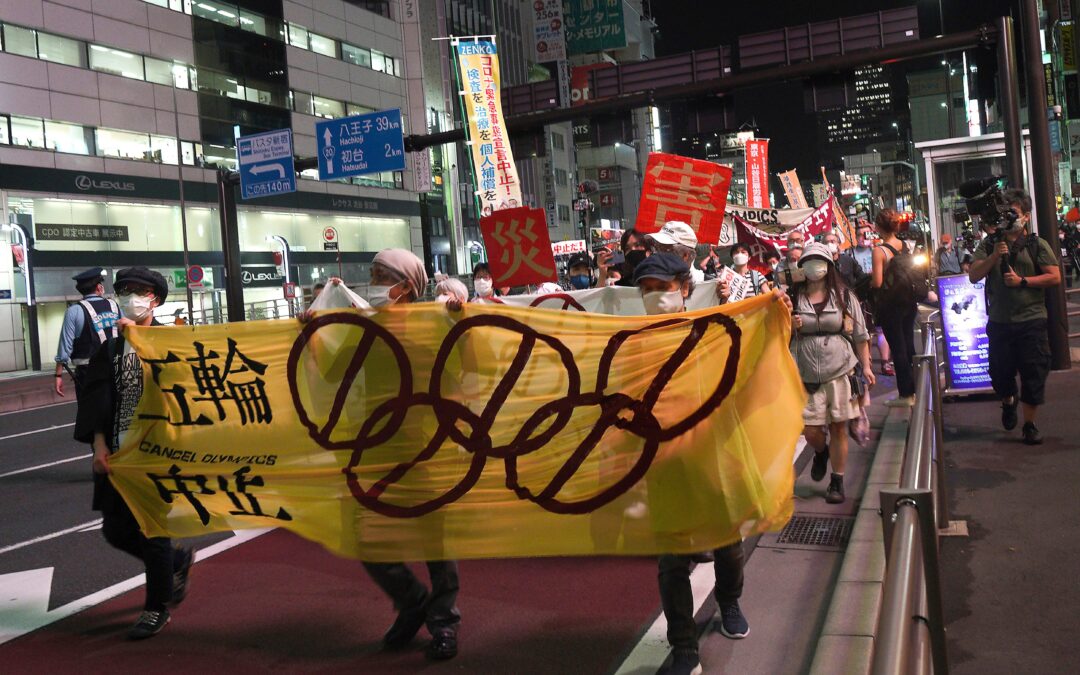 Over and over, year after year, the stewards of the Olympics say it: The Games aren’t supposed to be political. But how do you avoid politics when you’re trying to pull off an event of this complexity during a lethal and protracted pandemic?

— The Japanese medical community largely opposes these Olympics; the government’s main medical adviser, Dr. Shigeru Omi, has said it’s “abnormal” to hold them during a pandemic.

— Medical journals The Lancet and The New England Journal of Medicine have raised questions about the risks, with the former criticizing the World Health Organization for not taking a clear stand and the latter saying the IOC’s decision to proceed “is not informed by the best scientific evidence.”

— The second-largest selling newspaper in Japan, the Asahi Shimbun, has called for the Olympics to be canceled. So have other regional newspapers.

— There’s the risk of the Olympics spreading variant strains, particularly after two members of the Ugandan delegation were detected with the delta variant.

Still, they are going ahead; the opening ceremony is Friday. So how have the International Olympic Committee and the Japanese government of Prime Minister Yoshihide Suga been able to surmount strong opposition?

At the core: the “host city contract” that gives the IOC sole authority to cancel. If Japan cancels, it would have to compensate the IOC. And there are billions at stake. Japan has officially spent $15.4 billion but government audits suggest it’s twice that much. Japanese advertising giant Dentsu Inc., a key player in landing the corruption-tainted bid in 2013, has raised more than $3 billion from local sponsors.

Estimates suggest a cancellation — highly unlikely at this point, less than 48 hours before the opening — could cost the IOC up to $4 billion in broadcast rights income. Broadcasting and sponsors account for 91% of the IOC income, and American network NBCUniversal provides about 40% of the IOC’s total income.

The Associated Press sought perspectives from inside and outside Japan on the politics of putting this on.

“It’s a bit like a gambler who already has lost too much. Pulling out of it now will only confirm the huge losses made, but carrying on you can still cling to the hope of winning big and taking it all back. (Suga) might as well take the chance and hope for the best by going ahead with it. At least there is some chance that he can claim the games to be a success — just by doing it — and saturating the media with pride and glory might help him turn the negative opinion around.”

“The IOC carries a brand that is powerful. Athletes from around the world coming together to compete in peace is a heart-tugging draw. It takes an entertainment event and infuses it with a certain level of piety and awe. Who is against peace? With this “Olympism” as a goal, it has snagged corporate sponsors willing to pay lots of money. Therefore, the IOC has the leverage to exact contract terms very favorable to it and it certainly has done that in this case. The fact that only the IOC can formally decide to pull the plug on the games — even in the case of unforeseeable health events — is testament to this.”

“The host city contract hands over all the power to the IOC. The Olympic industry has had 120-plus years to win hearts and minds around the globe, with obvious success. In the age of the internet, their PR controls the message and protects the brand 24/7. The IOC is also beyond the reach of any oversight agency, including the governments of host countries. It can violate a country’s human rights protections with immunity, including athletes’ right to access domestic courts of law.”

“Based on what I am hearing, people within the government have been given their instructions to make the Games happen, and that is their singular focus right now — for better or for worse. Their hope is to get through the Games with as few missteps as possible. Politicians may well be aware of the risk they are taking but hope that once the games begin the Japanese public will persevere ‘for the good of Japan’ and forget how we got there.”

“The IOC is an elitist club that garners support from other elites and people — and countries — that aspire to joining the elite. From a sports perspective, the IOC represents the custodian of the exclusive medals that athletes in numerous sports aspire to, acts as the chief promoter of the mythology of the healing power of sport, and the organization that most international sports federations and national Olympic committees are reliant on for funding.”

“Politically, the opposition is so weak, the government can do pretty much anything it wants. Although a disastrous Olympics would damage the LDP’s credibility, the party likely feels safe because a majority of the public doubts the capability of the opposition to govern. The government may be hoping that once the games start, public opinion will turn — at the very least, producing a distraction, and at most, perhaps a rally round the flag effect.”

ROBERT WHITING, author of several books on Japan including the latest, “Tokyo Junkie”:

“You notice how nobody seems to be in charge. You have all these different entities: the Tokyo organizing committee; the Japanese Olympic Committee; the prime minister’s office; the governor of Tokyo, Yuriko Koike; the Japan Sports Agency; the Foreign Ministry; the Ministry of Education, Culture, Sports, Science and Technology. Suga is asked in the Diet (Japanese parliament) about canceling the games and says it’s not his responsibility. Nobody wants to lose face.”

“A lot of the opposition is shallow and movable, though of course that’s contingent on the Olympics actually working out. There will be a lot of people (broadcasters, etc.) invested in trying to make it look like a good show, so I think they’ll have the winds at their back if there’s not an appreciable spike in COVID deaths or any heat-related tragedies for the athletes.”