The Latest: Pakistan said to be seeing 4th virus wave 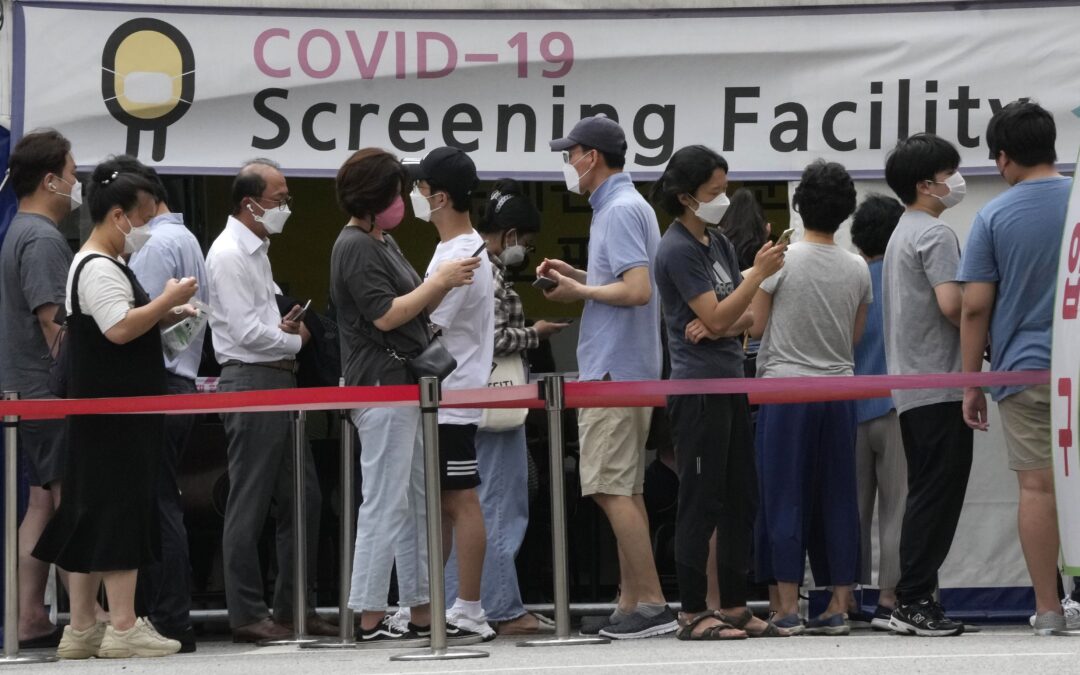 ISLAMABAD — Pakistan’s minister for planning and development said Friday there are clear signs that the fourth wave of coronavirus infections is starting in the Islamic nation.

Asad Umar said on Twitter that widespread disregard for social distancing rules and the emergence of the delta variant first identified in India were the two main causes.

His announcement came weeks after authorities said the country’s third COVID-19 wave had ended but that a fourth could start in July.

Prime Minister Imran Khan urged people the day before to adhere to infection-prevention recommendations to avoid a lockdown.

— AP Photos: With 4 million COVID dead, many kids left behind

ISLAMABAD — Pakistani’s minister for planning and development said Friday there are clear signs that the fourth wave of coronavirus infections is starting in the Islamic nation.

Asad Umar said on Twitter that widespread disregard for social distancing rules and the emergence of the delta variant first identified in India were the two main causes.

His announcement came weeks after authorities said the country’s third COVID-19 wave had ended but that a fourth could start in July.

Prime Minister Imran Khan urged people the day before to adhere to infection-prevention recommendations to avoid a lockdown.

SYDNEY — Australian authorities are further tightening restrictions in Sydney after reporting 44 new community cases, the largest number since a coronavirus outbreak began there last month. The city of more than 5 million is already in lockdown.

New South Wales State Premier Gladys Berejiklian said new restrictions would limit the number of people who can exercise together to two in most cases, and exercisers would need to stay close to home. The number of mourners at funerals would also be limited to 10 from Sunday.

Berejiklian said the state was facing it’s scariest test since the pandemic began and that unless numbers started to come down, authorities would likely extend the lockdown beyond next Friday.

She said the message was that people could not leave home unless it was absolutely necessary.

The highly contagious delta variant outbreak began after a limousine driver tested positive on June 16. He is thought to have been infected while transporting a U.S. flight crew from Sydney airport.

SEOUL, South Korea – South Korea will enforce its strongest social distancing restrictions in the greater capital area starting next week as it wrestles with what appears to be the worst wave of the coronavirus since the start of the pandemic.

The plans, which may bring Seoul’s thriving nightlife to a standstill, were announced shortly before the Korea Disease Control and Prevention Agency reported another new 1,316 cases on Wednesday, breaking the country’s previous one-day record of 1,275 set the day before.

Nearly 1,000 of the cases came from Seoul and nearby metropolitan regions, home to half of the country’s 51 million people, where officials will elevate social distancing restrictions to an unprecedented “Level 4” for two weeks beginning Monday.

The measures include prohibiting private social gatherings of three or more people after 6 p.m., shutting down nightclubs and churches, banning visitors at hospitals and nursing homes and limiting weddings and funerals to family-only gatherings. Protests will be banned and shopping malls will have to close at 10 p.m.

South Korea has recorded more than 8,300 new cases so far this month. The surge in infections is a worrisome development in a country where a shortage in vaccine supplies has left 70% of the population still waiting for a first shot.

OTTAWA — Canada’s chief public health officer says there are cases of the latest COVID-19 variant of interest in the country, but it’s too early to know how widespread it is or what impact it could have.

Dr. Theresa Tam said Thursday 11 cases of the Lambda variant that was first identified in Peru last year have been reported to Health Canada to date. However, the National Institute of Public Health of Quebec said Thursday it has confirmed 27 cases already, all in March and April.

The Public Health Agency of Canada is monitoring Lambda to see how it spreads and how it responds to vaccines, Tam said.

“We’re just trying to gather up some information on who it is that’s having the Lambda variant right now, but there’s very few cases at this point,” she said.

Early studies, including one from New York University published July 2, suggest Lambda may be a bit resistant to antibodies produced by the mRNA vaccines from Pfizer-BioNTech and Moderna, but concluded it is not by enough “to cause a significant loss of protection against infection.”

ROME — Confirmed new coronavirus infections in Italy have topped 1,000 for the second straight day as health authorities voice growing concern over what they say appears to be a trend toward rising case numbers.

Health Ministry figures show 1,394 cases were registered in the last 24 hours compared with daily caseloads in the hundreds in previous weeks.

Virus experts credit vaccination with keeping the number of new ICU admissions low despite the higher caseloads, however.

Italy is stressing the importance of vaccines as the virus’ delta variant steadily gains traction.

So far 41% of people in Italy older than 12 and thus eligible to receive the shots are fully vaccinated, while an additional 20% or so have received an initial vaccine dose.

NEW YORK — New research from France adds to evidence that COVID-19 vaccines offer strong protection against the delta variant that is spreading rapidly around the world and now accounts for most U.S. infections.

The delta variant is surging through populations with low vaccination rates. Researchers from France’s Pasteur Institute reported new evidence Thursday in the journal Nature that full vaccination is critical.

In tests, a single dose of the Pfizer or AstraZeneca vaccines “barely inhibited” the delta variant. But after a second dose, almost all experienced a big boost in immunity.

Dr. Rochelle Walensky, director of the U.S. Centers for Disease Control and Prevention, says highly immunized swaths of America are getting back to normal while hospitalizations are rising in other places.

A few weeks ago, the delta variant accounted for just over a quarter of new U.S. cases. But it now accounts for just over 50%, and in some places, such as parts of the Midwest, as much as 80%.

LISBON, Portugal — Portuguese authorities are requiring a negative test or proof of vaccination for people wanting to enter restaurants and hotels at peak periods in areas where the coronavirus is surging.

The government announced Thursday it wants people to use the EU Digital COVID Certificate to patronize such businesses on Friday evenings, weekends and public holidays.

The high-risk areas are mostly around the capital Lisbon and in the southern Algarve vacation region.

The certificates, which can be downloaded to an app, certify EU citizens’ tests and vaccinations. They also allow them to travel between countries without having to quarantine or be tested.

The system shut down all but the most essential services in early 2020 but resumed many in-person proceedings in the final months of the year.

About 16 interpreters were exposed to COVID-19, and one died in January 2021. That was followed by two other court employees the same month and another interpreter in February.

Ann E. Donlan, the court’s communications director, disputed the alleged violations and said it would appeal.

Mandaviya says India has already increased the numbers of oxygen-supported beds to more than 400,000 from 50,000 in March 2021.

Prime Minister Narendra Modi’s government approved the new spending, with the federal government accounting for 65% of it and states 35%.

More than half of India’s reported 400,000 coronavirus deaths, third highest in the world, have occurred in the past two months as the delta variant overwhelmed its health system.

New cases are on the decline after exceeding 400,000 a day in May. Total confirmed cases stand at 30.7 million.

UNITED NATIONS — U.N. Secretary-General Antonio Guterres says the “grim milestone” of 4 million deaths worldwide shows the coronavirus is outpacing vaccine distribution and the pandemic is far from over.

Guterres says most of the world has not received vaccines and more than half the victims of the coronavirus have died this year.

“Many millions more are at risk if the virus is allowed to spread like wildfire,” Guterres said. “The more it spreads, the more variants we see — variants that are more transmissible, more deadly and more likely to undermine the effectiveness of current vaccines.”

The secretary-general called for “the greatest global public health effort in history” to bridge the vaccine gap.

LIVONIA, Mich. — One of the largest Catholic health care systems in the U.S. is requiring all employees get vaccinated against COVID-19 to guard against infections and protect patients, staff members and their communities.

Trinity Health is one of the first hospital groups to mandate vaccinations. It says its 117,000 employees across 22 states, plus contractors and others doing business in its health facilities, will have to meet a series of rolling deadlines.

By Sept. 21 they must submit proof of vaccination or face termination, though religious and health exemptions are possible. Trinity Health, based in Livonia, Michigan, estimates that nearly 75% of staffers already have received at least one dose.

CEO Mike Slubowski says in a statement that Trinity Health has had workers and patients die of COVID-19 over the past year, and the mandate will help protect those who can’t be vaccinated such as young children and immunocompromised people.

Trinity Health serves communities that are home to over 30 million people through its 92 hospitals and 113 continuing care locations.

TOKYO — Fans are banned from the Tokyo Olympics following a state of emergency aimed at containing rising coronavirus infections in the capital.

The measure from the International Olympic Committee and Japanese organizers excludes local spectators from attending the game, following a ban on fans from overseas that was put in place months earlier.

SEOUL, South Korea — South Korea’s spy agency has told lawmakers there is no sign that North Korean leader Kim Jong Un has been inoculated against the coronavirus and his country has not received any foreign vaccines.

Lawmakers who attended the closed-door briefing by the National Intelligence Service say North Korea’s government is trying to dispel any expectations among ordinary citizens that they will receive vaccines from abroad. It is urging them to boost their anti-virus vigilance.

They added that the agency says Kim does not appear to have any health problem despite recent weight loss, which may have come from dieting to improve his overall condition.

TAIPEI, Taiwan — Taiwan has received 1.13 million doses of the AstraZeneca vaccine from Japan in the second such donation this year.

Taipei has benefited from vaccine diplomacy, receiving near 5 million doses from the United States and Japan following its worst outbreak starting in May.

It has accused China, which claims the self-ruled island as its renegade territory, of intervening to block the delivery of vaccines, something that Beijing denies.

Taiwan had signed commitments to purchase more than 29 million doses, but given global supply constraints and manufacturing delays, it was left with only about 700,000 when the May outbreak hit.

Allies have stepped in to help the island start distributing the shots quickly. About 11% of the population have received at least one dose.

LONDON — Britain’s transportation secretary says fully vaccinated U.K. residents returning from travel to most countries will no longer have to quarantine starting in July 19.

Travelers still must take a coronavirus test three days before returning to the U.K., and within two days after their arrival. Secretary Grant Shapps also confirms that children under 18 will not need to quarantine after traveling. The changes do not apply to nonresidents.

The government will also scrap guidance advising against travel to countries on the “amber list,” such as the U.S. and Spain.

Currently, people are advised not to fly to those countries unless it is for business or exceptional circumstances and are required to isolate for 10 days afterward.

Shapps says there is no change to the hotel quarantine requirement for arrivals from “red list” countries such as India and South Africa, even among people who are fully vaccinated.