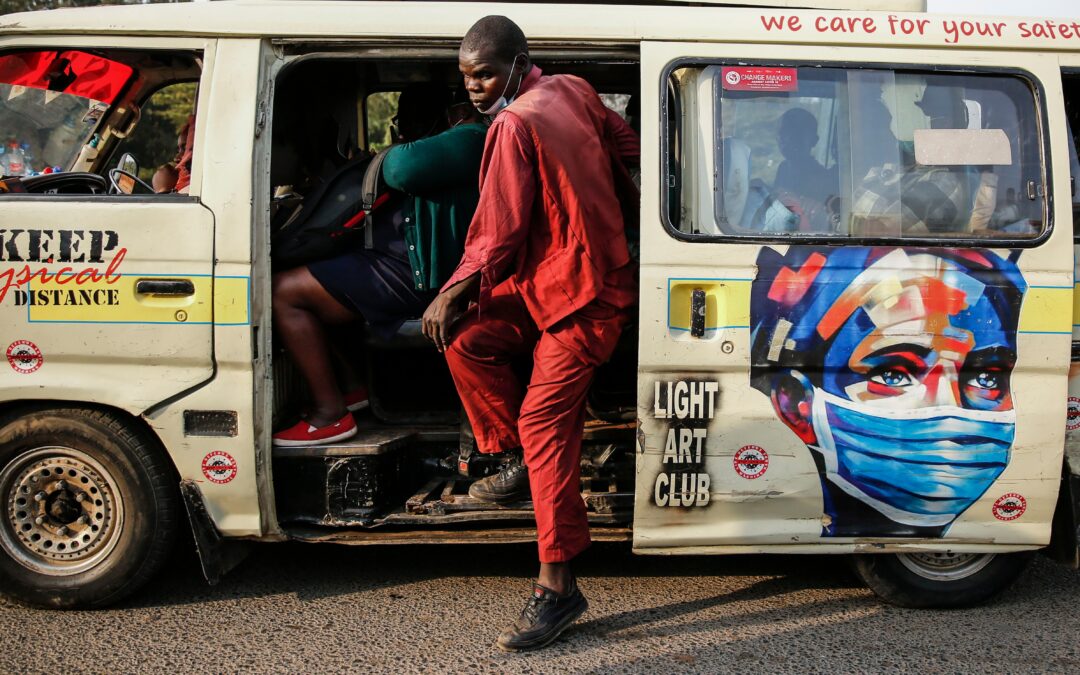 MANILA, Philippines — The Philippine president has agreed to ease a pandemic regulation requiring people to wear face shields on top of masks in most public areas, but health officials said they would appeal the decision as COVID-19 cases remain high in many areas.

The Philippines has made the wearing of plastic face covers mandatory since December in most public areas outside of home, including in shopping malls, transport terminals and places of worship, as an additional infection safeguard.

But compliance has been spotty and opponents have doubted its necessity and say the plastic shields dangerously obscure vision when they become moist.

Senate President Vicente Sotto III said President Rodrigo Duterte agreed to require face shields only in hospitals and allowed him and other senators to remove their face shields during a Wednesday night meeting.

Health Secretary Francisco Duque III said he would appeal. An inter-agency body dealing with the pandemic is tasked with making an assessment and informing the president of its position.

An alarming surge in coronavirus infections has started to ease in Manila and outlying regions. Daily cases remain high and lockdowns have been reimposed in several provinces that have reported case spikes.

— Why are the Olympics going on despite public, medical warnings?

— Black Americans have new option for health care in churches

TOKYO — Japan has announced the easing of a coronavirus state of emergency in Tokyo and six other areas from next week, as the country begins final preparations for the Olympics starting in just over a month.

Japan has been struggling since late March to slow a wave of infections propelled by more contagious variants, with new daily cases soaring above 7,000 at one point and seriously ill patients straining hospitals in Tokyo, Osaka and other metropolitan areas.

Daily cases have since subsided significantly, paving the way for Prime Minister Yoshihide Suga to downgrade the state of emergency when it expires on Sunday to less stringent measures. They will last until July 11. The Summer Olympics are scheduled for July 23-Aug. 8.

Suga said the relaxed measures will focus on early closures of bars and restaurants.

If another surge occurs and strains hospitals, “we will quickly take action, including strengthening of the measures,” the prime minister said, addressing concerns by medical experts.

JAKARTA, Indonesia — Indonesia’s president has ordered authorities to speed up the country’s vaccination campaign as the World Health Organization warned of the need to increase social restrictions amid a fresh surge of coronavirus cases in the country.

“We need vaccination acceleration in order to achieve communal immunity, which we hope can stop the COVID-19 spread,” President Joko Widodo said Thursday while visiting a vaccination center just outside the capital, Jakarta.

Widodo said he ordered his Cabinet ministers and local governments to increase the number of people vaccinated each day to 1 million by next month. He said Indonesia is currently vaccinating half a million people a day.

Indonesia saw its number of confirmed new cases climb to nearly 10,000 a day on Wednesday, an increase blamed on travel during last month’s Eid al-Fitr holiday as well as new virus variants.

LONDON — Singer-songwriter Peter Gabriel has warned that a music and arts festival he co-founded in England may have to be cancelled without support from the British government.

The four-day Womad festival, which showcases international music, arts and dance, is scheduled to start near the town of Malmesbury on July 22, just three days after the new date when lockdown restrictions in England are set to be lifted.

Though the government has expressed confidence that all remaining restrictions on social contact will be lifted on July 19, Womad organizers are clearly concerned about their financial exposure.

Gabriel told BBC radio that the government should introduce “something like an insurance scheme, some sort of underwriting scheme.”

He said organizers would likely have to cancel if support is not forthcoming, not least because the festival has faced bankruptcy twice before.

“We can’t risk sinking it this year,” Gabriel said.

Government spokesmen have fended off demands for more support for those affected by its decision earlier this week to delay the planned lockdown easing to July 19.

BERLIN — Austria plans to remove capacity limits on cultural and sports events, reopen clubs and drop restrictions on weddings and parties from July 1.

Chancellor Sebastian Kurz said Thursday that a requirement for people attending events to prove that they have been vaccinated, tested or have recovered from COVID-19 will remain in place, but they won’t have to wear masks.

Kurz also said that mask requirements elsewhere will be relaxed. From the beginning of next month, people will no longer be required to wear full protective masks in shops, museums and public transport — simple face coverings will be allowed. He said more measures will be relaxed on July 22.

Like several other European countries, Austria has seen a steep decline in coronavirus infections in recent weeks.

The country recorded 15.5 new cases per 100,000 inhabitants over the past seven days. So far, 4.28 million people in the nation of some 8.9 million people have received at least one vaccine dose and 2.23 million have been fully vaccinated.

CANBERRA, Australia — Australia has raised the age for which the AstraZeneca vaccine is recommended to 60 from 50 after the shot was blamed for a 52-year-old woman’s death last week from blood clots in the brain.

Health Minister Greg Hunt described the decision on Thursday as conservative and reflecting the relatively low risk of catching the virus in Australia.

Australians aged between 50 and 59 are now recommended to use the only other vaccine approved in Australia, Pfizer.

Only two deaths in Australia have been blamed on rare blood clots believed caused by AstraZeneca. The first was a 48-year-old woman who died in April.

That death led to AstraZeneca being recommended only to adults aged over 50.

People who have had their first AstraZeneca shot without developing clots have been told it is safe to have the second dose three months later.

WELLINGTON, New Zealand — New Zealand has detailed plans for the main part of its vaccine rollout.

The country of 5 million has been among the most successful in keeping out the virus but has been slow to vaccinate its people, with just 11% receiving their first dose so far.

Under the plan announced Thursday by Prime Minister Jacinda Ardern, people aged 60 and over will be offered vaccines from July 28, those 55 and over from Aug. 11, and those aged 45 and over by late August. After that, the plan is to offer everybody vaccinations by the year’s end.

Also on Thursday, Statistics New Zealand reported the economy had grown by 1.6% in the March quarter, allowing the country to avoid a double-dip coronavirus recession after the economy fell by 1% in the last quarter of 2020. Annual GDP fell by 2.3%.

O’FALLON, Mo. — A swath of southern Missouri is seeing a big rise in coronavirus cases and hospitalizations at just the wrong time — as tourists eager to get out after being cooped up for a year make their way to popular destinations like Branson and Lake of the Ozarks.

Data from the state health department’s COVID-19 dashboard on Wednesday showed 206 people hospitalized with the virus in southwestern Missouri — nearly double the 111 hospitalizations from that region at the start of May. The number of people in intensive care units in the region has tripled — from 22 a month-and-a-half ago to 65 now. Meanwhile, statewide hospitalizations have remained steady since March.

Health experts cite two factors driving the surge: The presence of the faster-spreading Delta variant, and a reluctance among residents to get vaccinated.

While 52.6% of Americans have initiated vaccination, according to the U.S. Centers for Disease Control and Prevention, most southern Missouri counties are well short of 40%. Branson sits in Taney and Stone counties, where the vaccination rates as of Wednesday were 27.4% and 28.4% respectively. Miller County, at Lake of the Ozarks, had a vaccination rate of 22.9%.

MIAMI — Royal Caribbean International is postponing for nearly a month one of the cruise line’s highly anticipated first sailings from the U.S. since the pandemic began because eight crew members tested positive for COVID-19, the company’s CEO said.

The new Odyssey of the Seas was to set sail from Fort Lauderdale, Florida, on July 3 but is now postponed to July 31. Royal Caribbean International’s CEO Michael Bayley said late Tuesday on Facebook that the decision had been made “out of an abundance of caution,” adding that the company is also rescheduling a simulation cruise scheduled for late June.

The company says all 1,400 employees aboard the Odyssey of the Seas were vaccinated on June 4 but two weeks had not passed for their bodies to build protection against the virus. The ship was to sail from Fort Lauderdale July 3 but has been rescheduled for July 31.

Royal Caribbean International has said that passengers are “strongly recommended” to get vaccinated, adding that unvaccinated passengers must be tested for the virus and follow other measures.

The debut of the Odyssey of the Seas was highly anticipated as cruise lines attempt a comeback after more than 15 months of not sailing from the U.S.

RICHMOND, Va. — An inmate early release program aimed at controlling the spread of the coronavirus in Virginia prisons will end on July 1.

State prison officials have released more than 2,100 inmates early in the past year to reduce the prison population during the pandemic. The program was authorized under a budget amendment proposed by Gov. Ralph Northam and approved by state lawmakers in April 2020. The authorization expires on July 1.

Department of Corrections Director Harold Clarke says about 70% of the inmate population has been vaccinated against COVID-19. There are no current cases among the population. A total of 56 inmates and five staff members who tested positive for the coronavirus have died during the pandemic.

LISBON, Portugal — Portugal is experiencing a surge in coronavirus cases, with the government set to review its pandemic rules on Thursday.

The European Union country reported 1,350 new cases on Wednesday, the highest daily total since February. Experts say the delta variant first identified in India may be driving the spread. The Lisbon region has accounted for almost 1,000 of the new cases.

Portugal was the worst-hit country in the world in January, when daily cases peaked at more than 16,000. Nearly 7,000 COVID-19 patients were in the hospital and close to 1,000 were in ICUs. Now, hospitals have 351 virus patients, with 83 in intensive care.

A nation of 10.3 million people, Portugal has inoculated 42% of its population with a first dose of a COVID-19 vaccine and 25% have had both shots.