The Latest: Soccer may explain more cases in England’s men 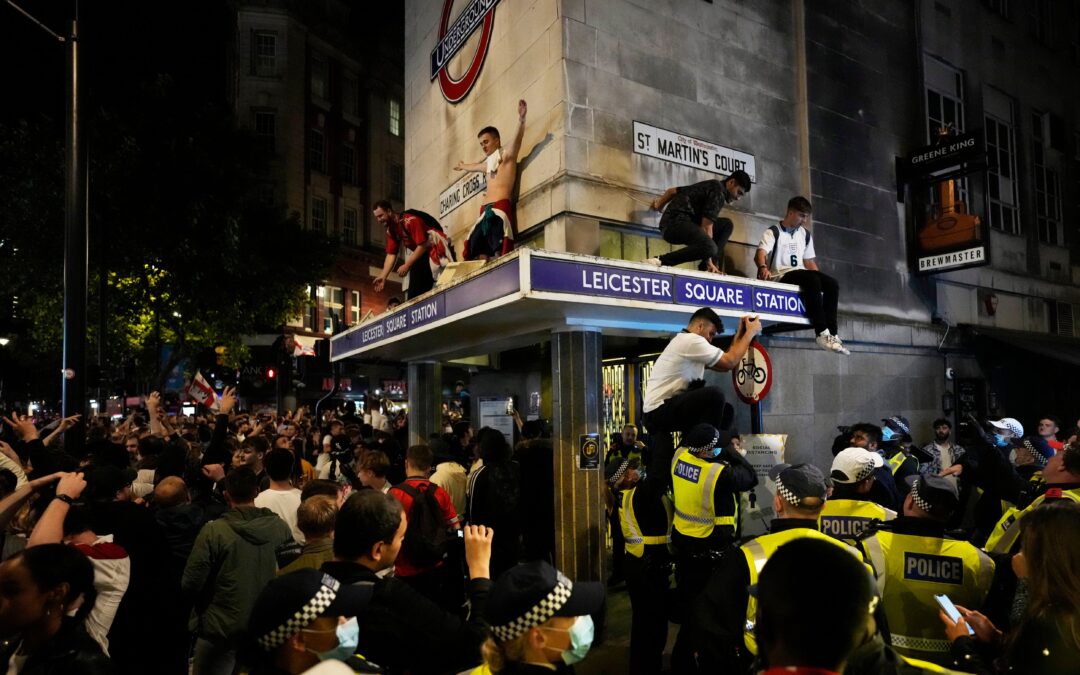 LONDON — A closely monitored coronavirus infection survey indicates that men gathering to watch England’s progress in soccer’s European Championship may be a reason why women were less likely to test positive for the virus in recent days.

Interim findings covering June 24 to July 5 from Imperial College London and polling firm Ipsos Mori showed infections quadrupled since the previous so-called React-1 study. According to the survey, one in 170 people in England is infected, and there was a recent doubling time of six days.

Professor Paul Elliott, director of the React program at Imperial’s School of Public Health, said the prevalence of the virus also was higher in men — 0.7% against 0.5% for women. He speculated that men gathering at homes and pubs to watch the Euros was one reason for the trend.

The study was conducted before tens of thousands of spectators watched England beat Denmark 2-1 in a semifinal match on Wednesday evening at London’s Wembley Stadium. England’s win prompted scenes of wild jubilation elsewhere as fans celebrated the national team making its first final in a major tournament since the 1966 World Cup. In Sunday’s final, England will play Italy, again at Wembley.

— Global COVID-19 deaths top 4 million amid rush to vaccinate, a suicide in Peru

— What vaccinated people need to know about taking precautions at hotels

SYDNEY — Australia is attempting to accelerate its sluggish COVID-19 vaccination rollout by encouraging Sydney residents to get their second AstraZeneca shot after two months instead of three.

Prime Minister Scott Morrison said on Thursday he encouraged people to take a second dose of AstraZeneca after two months given a growing cluster of the delta variant that has locked down Sydney for at least three weeks.

Only 10% of Australians over the age of 16 are fully vaccinated. That combined with Australia recording fewer than 31,000 confirmed cases since the pandemic began leaves the population particularly vulnerable to the delta variant, which was first identified in India and is thought more contagious than the original virus and other variants.

Sydney reported on Thursday 38 new cases involving the delta variant in the latest 24-hour period. That was the largest daily tally since a cluster emerged after a limousine driver tested positive on June 16. He is thought to have been infected while transporting a U.S. flight crew from Sydney airport. Around 400 cases are now linked to that driver.

Australian-manufactured AstraZeneca was supposed to become the backbone of Australia’s vaccination program when its rollout began in March. AstraZeneca was initially recommended for all adults in two doses 12 weeks apart.

The vaccine is now only recommended in Australia for adults over age 60 after two women aged 48 and 52 died from rare blood clots that were blamed on AstraZeneca’s product.

ISLAMABAD– Britain says it will provide a new package of genomic sequencing support to help Pakistan’s fight against new variants of the coronavirus.

According to a statement released by the British Embassy, Pakistan will be able to draw on U.K. expertise and support to detect quickly new and potentially more dangerous virus variants.

Under an agreement with Pakistan announced Thursday,, the U.K. will share its expertise and will provide reagents – a substance that causes a chemical reaction in test tubes – and other technical support to Pakistan to increase the country’s genomic sequencing capacity.

The latest development comes amid a steady surge in CONVID-19 cases in Pakistan.

The Ministry of Health says that due to the increase in cases, it will no longer test people for the virus in their homes in and around the capital. The ministry has also suspended all pregnancy services in and around Suva until July 26, saying people experiencing pregnancy emergencies or labor should go directly to Colonial War Memorial Hospital.

Fiji has reported 59 deaths since the outbreak of the delta variant in April, although officials aren’t counting 19 of those as virus fatalities because the patients had serious pre-existing conditions. Home to 940,000 people, Fiji had reported just two COVID-19 deaths before that.

SEOUL, South Korea — South Korea has reported its biggest daily jump in coronavirus cases since the start of the pandemic as long lines snake around testing stations in the capital, where the virus has accelerated following months of complacency.

More than 1,000 of the infections were in the greater Seoul area, which is home to half the country’s 51 million people.

The viral surge is a worrisome development in a country where 70% of the people are still waiting for their first vaccine shot.

The country has struggled to maintain public vigilance with warmer temperatures and months of fatigue luring larger crowds to restaurants, bars and parks.

PORTLAND, Maine — Health officials in Maine say more than half the eligible population is now fully vaccinated against the coronavirus in every county in the state.

Maine has one of the highest vaccination rates in the U.S. More than two-thirds of people age 12 and older are fully vaccinated.

Data from the Maine Department of Health and Human Services show that the state’s highest vaccination rate is in Cumberland County, which is the state’s most populated as home to Portland. The rate there is about 80%.

The county with the lowest rate of eligible people fully vaccinated is Somerset, a mostly rural area where the rate is about 53%. That’s still a higher number than many states.

SACRAMENTO, Calif. — At least nine people who work at the California state Capitol have contracted the coronavirus, triggering a return of the mask mandate for lawmakers and staff.

Masks have been required in public spaces inside the Capitol throughout the pandemic. But fully vaccinated lawmakers and staff had been allowed to remove their masks in their offices.

Four of the new cases at the Capitol are people who were fully vaccinated.

State data shows such cases are rare. The state has confirmed just 8,699 coronavirus infections among the more than 20 million people vaccinated in the state.