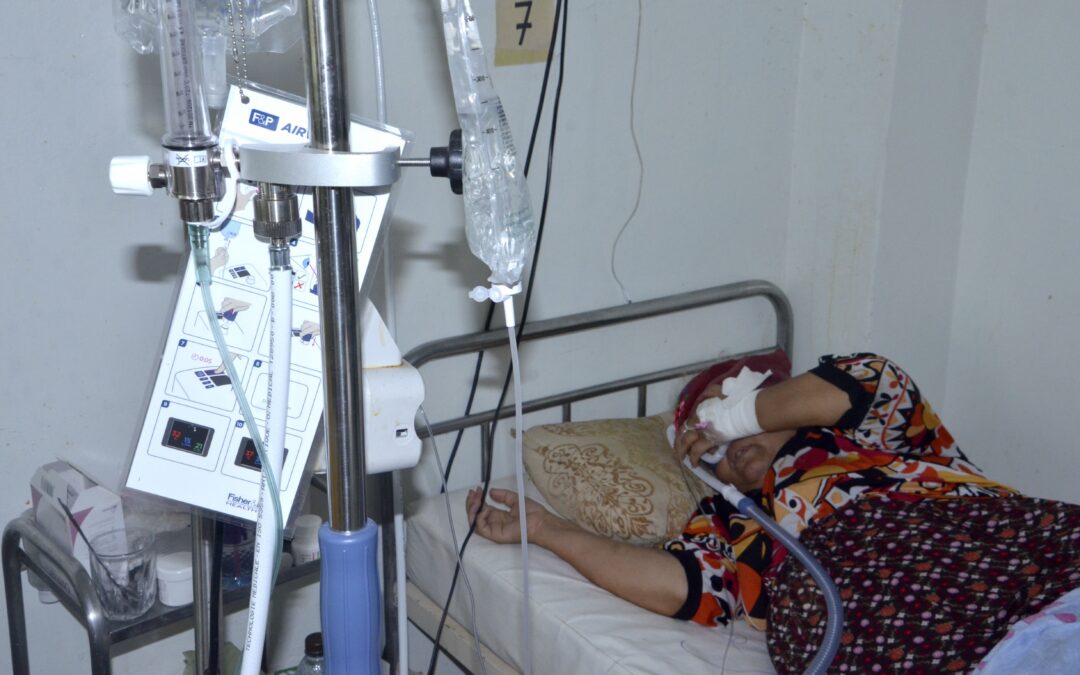 A man wearing a protective suit quickly yet carefully places a black sheet over a COVID-19 victim laid out in a coffin in a courtyard at Ibn Jazzar Hospital in the Tunisian town of Kairouan. He then folds a white sheet on top and sprinkles the body with disinfectant from a small bottle, while loved ones and other hospital visitors cry out “Allahu Akbar,” or “God is great,” in Arabic.

Patients in the hospital’s overfilled COVID-19 ward are dying daily amid a spike in coronavirus infections in the North African country, with Kairouan and three other regions especially hard hit. At the regional hospital, tensions mount as personnel try to cope with scarce means.

“I’m shocked,” said Sana Kraiem, whose mother was put in a wheelchair in a roomful of COVID-19 patients, “like a dog”, she described.

“They told me they can’t free up a bed occupied by a dead person,” a distressed Kraiem said in an interview with The Associated Press during a visit this week to the hospital.

The half-dozen rooms devoted to COVID-19 patients each packs in five or six beds. A patient who recently died was seen still occupying one of the beds in each room visited. A special service eventually removes the body.

Over the past month, confirmed virus infections in Tunisia have reached the highest daily levels since the pandemic began, but the vaccination rate remains low, according to data from John’s Hopkins University. Tunisia has reported Africa’s highest per-capita death toll from the pandemic, and is currently recording one of the highest per-capita infection rates in Africa, the data indicates.

The Kairouan region is living through “a real horror movie,” Mohamed Rouis, the regional health director in Kairouan, was quoted saying in Tunisian media earlier this month.

A temporary hospital has been set up on the outskirts of the city. The army has also bolstered that with a military care facility under a green tent which houses a line of beds with monitoring equipment and respirators. Despite the dire situation, there is no widespread testing for COVID-19 in the poor, rural region.

The Ibn Jazzar hospital’s supervisor, Zohra Hedwej, explained that goodwill gestures by officials end up as frustrating half-measures, such as opening a section for coronavirus patients, without making provisions for medical staff.

“We resort to recruiting workers from other departments in the hospital,” Hedwej told the AP. “It’s very difficult to find volunteers because some don’t know the level of their (own) physical immunity, others fear for their relatives who have weak immunity. We want a stable workforce that is able to work.”

Hedwej said there is such a dearth of trained personnel that sophisticated equipment can’t be used at times.

“We need labor more than we need new equipment,” she said, adding that while equipment comes from donors — who are still needed — there is still a greater need for trained professionals “who can use it and take care of it.”

Facing an “alarming” growth in infections, the Tunisian government on Tuesday extended an overnight curfew and ordered stepped-up vaccination efforts in rural areas. But it resisted calls for a national lockdown because of public frustration at the economic impact on a population that’s already struggling with unemployment and economic decline.

Tunisia has reported more than 14,000 virus-related deaths amid its population of 12 million since the pandemic began, with more than 400 infections per 100,000 people in four regions, including Kairouan, where hospitals are over capacity.

Bouazza ben Bouazza in Tunis, and Elaine Ganley, in Paris, contributed to this report.