Thailand preparing to limit exports of its COVID-19 vaccine 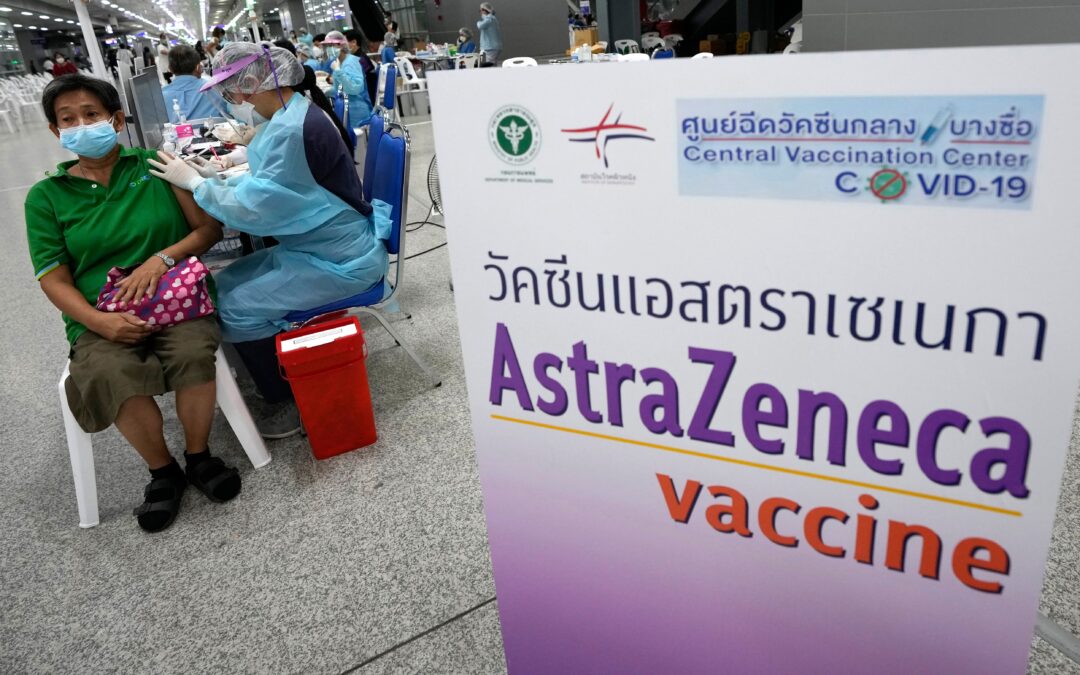 Health authorities in Thailand said Wednesday they will seek to impose limits on exports of locally produced AstraZeneca coronavirus vaccine because the country doesn’t have enough for its own needs.

The proposal comes as new cases and deaths are rapidly increasing along with the spread of the more contagious delta variant of the virus, straining hospital facilities and threatening to set back a recovery of the country’s battered economy.

Limiting exports will pose a problem for Southeast Asian countries that have signed contracts to buy Thai-produced vaccines, though some may be able to obtain supplies elsewhere.

Dr. Nakorn Premsri, director of the National Vaccine Institute, said its vaccine committee agreed in principle to issue an order temporarily limiting exports, but did not give any details. The order would be issued by designating it a matter of national security.

A company owned by Thailand’s king, Siam BioScience, was supposed to supply the country with 10 million doses of AstraZeneva vaccine a month, but acknowledged earlier this month that it can provide only 5 million to 6 million doses.

Siam BioScience was awarded a license by AstraZeneca to be a regional production hub supplying eight other countries despite having no experience in manufacturing vaccines.

Several countries have reported being told by Siam BioScience that they would not receive the contracted vaccines on time, lending weight to speculation that the Thai factory was having production problems. Nakorn said Wednesday that AstraZeneca is supposed to deliver at least one-third of its monthly production at the Thai facility to Thailand’s government.

Thailand launched a mass vaccination campaign only in early June, and critics accuse the government of Prime Minister Prayuth Chan-ocha of failing to secure adequate and timely supplies of vaccines. Its plan at the beginning of the year would have allowed only about half the 69 million population to be vaccinated this year, and most of them in the second half of the year.

Thailand has so far administered 13.23 million vaccine doses. Around 9.88 million people, or about 14.3% of its 69 million population, have received at least one dose.

The government is now targeting 100 million doses by the end of the year, enough to vaccinate 50 million people, just over 70% of the population.

Thailand has been negotiating with other producers to make up for the vaccine shortfall. So far, it has only used vaccines from AstraZeneca and China’s Sinovac and Sinopharm, although the government says it has agreements to also buy from Pfizer and Johnson & Johnson.

The head of the Thai Red Cross Emerging Infectious Diseases Health Science Center, Dr. Thiravat Hemachudha, said last week that a study he helped conduct found that Sinovac was less effective at fighting the delta variant, and that a booster dose of AstraZeneca would increase its efficacy.

Other Thais who have received only one dose of Sinovac will be able to get AstraZeneca for their second dose, Health Minister Anutin Charnvirakul said.

A nighttime curfew and other new coronavirus restrictions came into effect Monday in Bangkok and nearby provinces and in the country’s four southernmost provinces, which have been the most severely affected by the current virus surge.

The sharp rise in cases has caused a severe shortage of hospital beds for COVID-19 patients, prompting the authorities to allow patients to isolate at home and in community centers, and giving them access to antigen test kits that were previously limited to the medical community.

India also imposed limits on vaccine exports when it was hit by a devastating coronavirus outbreak earlier this year.